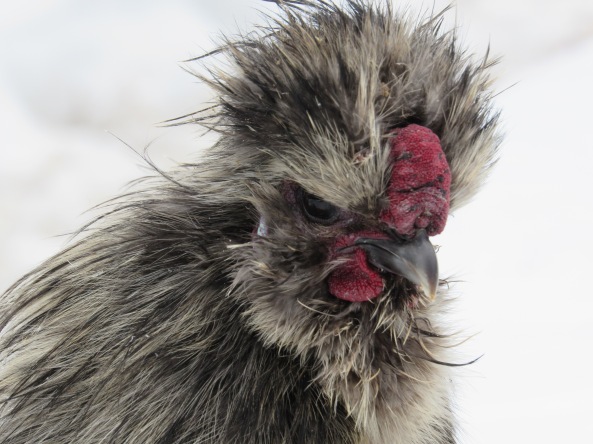 This silkie rooster is one of the many ( 6 total? ) that my dear friend Sally gathered up during one of her epic chicken buying frenzies. I think 20 new birds landed at her place this past summer, and six of them ended up being roosters. They’ve been wintering here over the last few months, and after some talk about how practical ( not) it is to have more than one rooster, several are up for grabs. 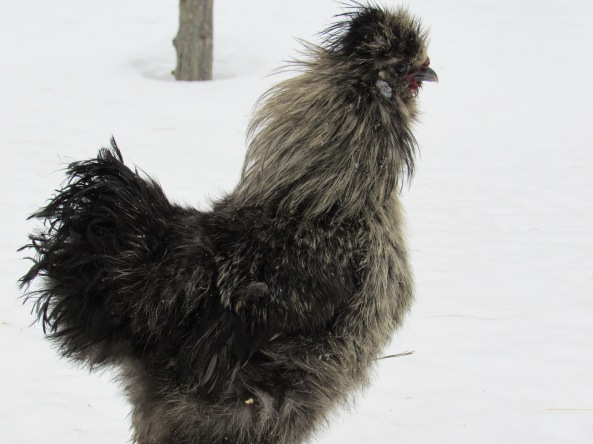 Roddy is one of them. As you can see, he is a beautiful silver grey silke, quite flamboyant actually. Very serious about impressing the ladies, and feels that his hairdo adds to his sex appeal. Anyone interested in owning him ? Free. Really, I mean how do you put a price on a rock and roll star chicken?

Next up is a bit more traditionally feathered rooster, a grand boy who can really strut his stuff. He’s large, with beautiful bronze, crimson, and steel grey feathering. Also quite fond of the hens, he takes a less ” showboat” approach to his relationships. He doesn’t need to parade around stealing the show, he’s much more sophisticated and gentlemanly than that. If anything, he’s a bit aloof……this seems to woo the young hens he shares a coop with. Anybody need a rooster with both beauty and brawn? He’s your man. Also….free. All this free does not mean there is anything wrong with these fellas, but let’s face it ……6 roosters? Both will be a year old this spring, and truly they are such nice roosters, it would be too bad to not find them good homes. So, if your hens are looking for a nice husband or live in male roommate, let us know here at Fernwood, we’ll arrange a time for you to pick them up.

This last photo is of H.P.( half pint) the rooster that will actually go back to live with Sally this summer, he’s an awfully sweet little guy and due to his size, feels a bit threatened with the idea of having to spend the summer with all these boys. So…….free roosters at Fernwood Nursery! Come and get’em!

3 comments on “If Rod Stewart were a chicken”