One of the least appreciated and misunderstood native shrubs are the sumacs. We have several stands nearby and appreciate what they offer the winter landscape. It is certainly a plant with many merits, both aesthetically and environmentally. Thought to be poisonous and invasive, these shrubs do have an important place in our native landscape and can have one in yours. Staghorn sumac (Rhus typhina) and smooth sumac (Rhus glabra) are both widespread in Maine. Smooth sumac is the only shrub species found in all 48 contiguous states. Staghorn sumac getting its name from the velvet-like hairs on the new growth, and the smooth from the lack of it. Both grow in full sun to light shade and are drought resistant, being able to grow in drier soils. The bright red fruits appear in late summer and last through the winter providing important food for many species of wildlife. Chickadees, thrushes, cardinals, and pileated woodpeckers are some of the birds we see frequenting the grove of sumac at the farm, it is consumed by many other species as well…..like our healthy population of turkeys. In addition, they are larval hosts for the Hairstreak butterfly and attract native bees in large numbers.They also attract predatory and/or parasitoid insects that prey upon pest insects. Very good to know, yes? We can all use help with the pest insects we battle.

Neither of the sumacs (Rhus typhina or Rhus glabra) are poisonous and in fact, the fruit can be used in many food and drink recipes and are high in vitamins A, C, and antioxidants. Ground sumac has become a popular spice in the culinary world. It has always been used in Mediterranean and Middle Eastern dishes, and is a key ingredient in the spice mix Za’atar. All it takes is a bit of promotion in a trendy culinary magazine, and a spice like sumac quickly finds its spot on our pantry shelves. Red fruited sumacs are not poisonous. Also, the other parts of the plant, as well as the fruit have been used medicinally as an astringent, for coughs, sore throats, and intestinal ailments. The berries, root, inner bark, and leaves can all be used to make dyes. We have used it for dying yarn and wool here at the nursery with great results. It really is a plant with many merits. As a landscape plant, they can be incredibly useful and easy. Yes, they spread and can cover large areas, but if you do have the space or a tough spot that would be difficult for many plants, it may be just what you need. Think of it as a tall (8-15 feet) ground cover. Tolerant of dry poor soils, great fern-like foliage, spectacular red and orange fall color that rivals the traditional autumn colors of our trees, and interesting form in the winter are all attributes that should be considered. Not to mention the benefits to wildlife and pollinators. There are cultivars available that do not spread as much and have interesting foliage forms and colors. The next time you see sumac growing along the highway or in an open area, try to take in its beauty and uniqueness and not think of it as a large poisonous weed. Just for fun……we’ll leave you with a recipe featuring the spice sumac. Enjoy! 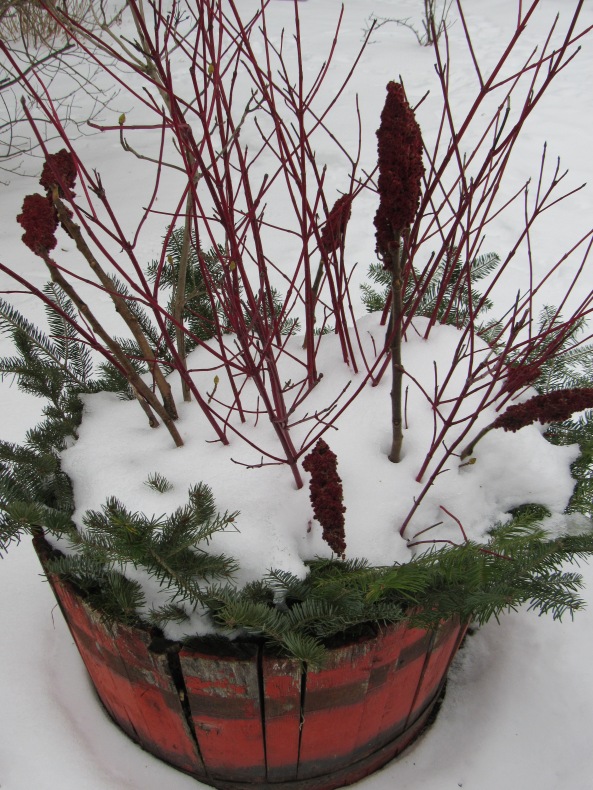 8 comments on “The Merits Of Sumac”